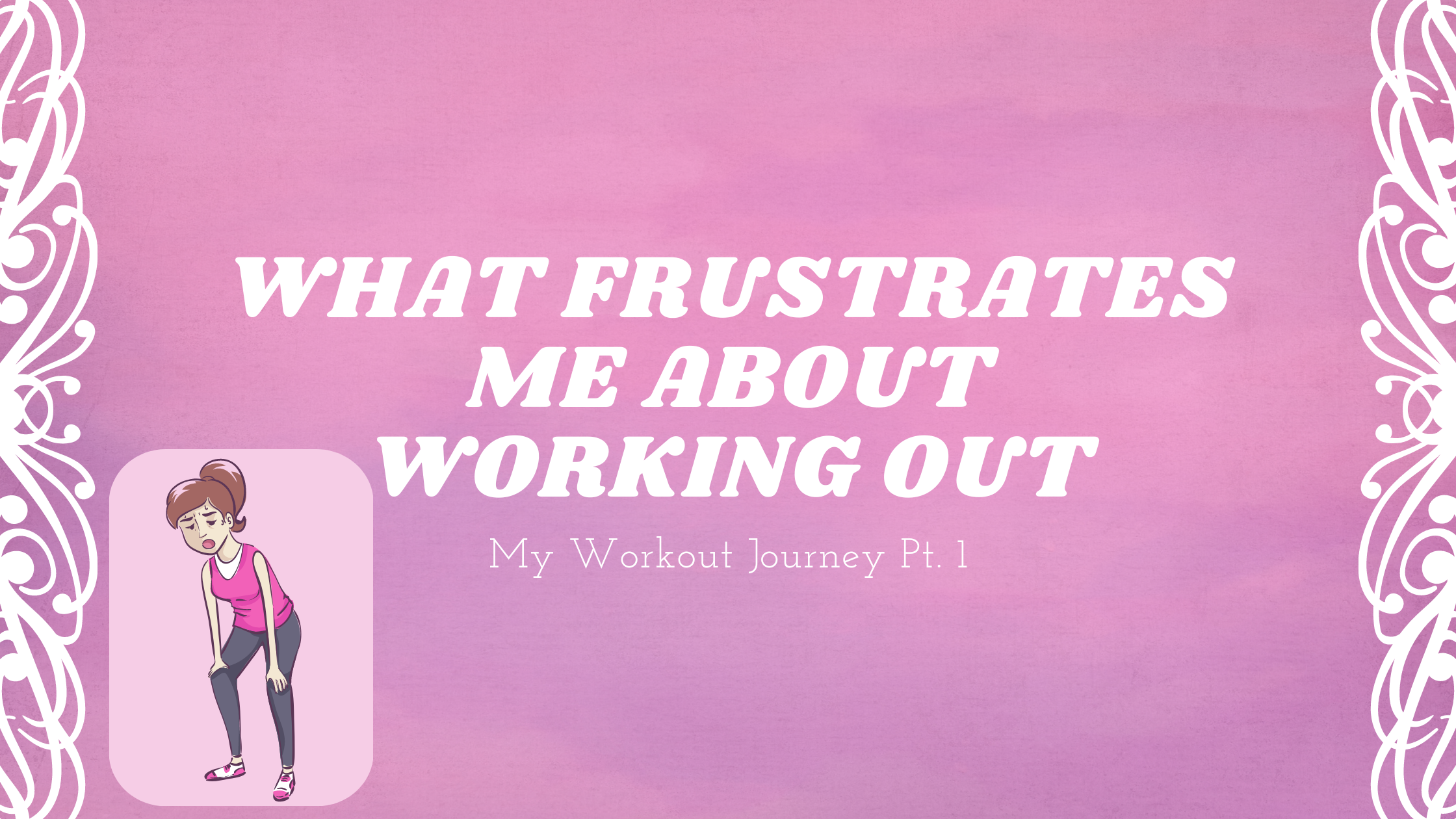 I have been working out for a while now, for roughly more than a year, with probably a combined two months break. The experience has been the most interesting for me thus far, which is why it comes to no surprise that I would eventually want to share my experience on this.

But I suppose it’s odd that I want to share something negative about it first! Haha!

Let me start right off by stating that I actually love working out. I do, I really do, or else I wouldn’t even keep doing it for more than a year. In fact, I fully intend to make my next writeup all about how working out has helped me mentally and it will be a lot more positive and uplifting compared to this one.

And I think that’s why I want to write this first. Mostly just so I can get it out of my chest because no matter what I still go through these frustrations from time to time (mostly due to my depression), and also cause despite how much I love working out now, I still relate to those who hate working out. I know why you guys hesitate to do it, other than the lack of time, as there have been times where, even after doing it, you don’t FEEL like this is for you, or you feel even more demotivated than before.

Heck, I still go through moments like that even during my recent workout sessions. I question whether the pain I go through is even worth it, whether I would really change in any way that would make me feel good about myself. But first, you’re going to need to understand what my workout is.

For context, here’s my current workout plan: I go for virtual classes with a trainer called Wana who has her own studio in Kelana Jaya called WanaFit, which I used to go to as well before the pandemic hit. I chose her as she was the closest to my office that offered HIIT (a workout that caught my attention, more on this in my next writeup) at a timing that was convenient and possible for me.

Her classes are also pretty small in a way, never exceeding 10 people most of the time. It was comfortable enough for me, and the trainer gave me enough attention to work on my form and push me harder without me feeling overwhelmed with too much attention and focus on me. I wanted someone to check up on me, sure, but I couldn’t take it if all the comments (good or bad) were just about me. Besides, it’s a lot more motivating for me when I see other people doing their best next to me.

Her virtual classes have me joining a zoom call with other participants, with her classes being held from Monday to Friday. Each class is different: HIIT, Core & Abs, Upper Body Strength Training, Lower Body Strength Training, and Full Body workout (which is mostly punching and kicking). Each one focuses on different fitness levels and even body parts, something which I like as well.

So What’s Frustrating Me?

This entire process of working out and reaching fitness goals is still a WIP for me, but for now I can safely say that the benefits of doing these workouts have outweighed most of the negative things I am about to say here. But let’s get all of these frustrations out of the way.

OH MY GOD IS IT TIRING. It’s so tiring at times, especially when I do all five of the workouts Monday to Friday, I feel nothing but exhaustion. The low energy caused by the workout and DOMS (Delayed Onset Muscle Soreness) that follows create such a fatigue in me that by the end of the day, and especially the weekends, I don’t feel like doing anything.

It can get so bad that I don’t even have the energy to watch the shows I want to watch or even do some personal writing, because I’m too tired to fully concentrate on them. And it frustrates me to no end, because sometimes I want to do more than rest but my workout and body demands that rest period.

I know what you’re thinking; why do all five workouts then? Because I want to push myself of course haha. Besides, I like all the classes, I really do. No doubt there are certain weeks where I tell myself to not attend all classes because it has affected my work productivity at times, but whenever I can I try to go for all five classes.

I do question why I push myself as hard as I do, thus why I need to list down this frustration of mine. I don’t regret it, but it is a frustrating aspect of working out I need to deal with.

2. It sucks to do it when depressed

Because I push myself with these workouts, there have been days where I forcefully participate in workouts even when I know I’m not in a good mental state for it and it can be awful.

I have cried during my workouts because I was really depressed and sensitive, so having my trainer push me or point out bad posture, even if it was for my own good and for a short while, was enough to put me to the edge. Of course, there’s no time to really cry when you’re still pushing yourself (which sure, isn’t as strong as I could be, but at least I did it), but the lingering bad sensation never really goes away even if a part of me was a little happy that I did it.

There’s still that other part of me that’s resentful that I did it as there was always the risk that my trainer would realise those are tears and not sweat dripping down my face. That, and the fact that it just seems like I’m not taking care of my mental health at all, even though workouts are supposed to help in that aspect. It has definitely helped in the long run, but in the moment where I don’t feel it helps, it seems cruel.

The best way to describe it is it’s like taking a very bitter medicine that really helps you, but you’re resentful of the lingering bitterness rather than focus on the fact that you’re better.

3. Not seeing/noticing any worthy changes

Imagine going through all that effort of working out, only to get back on the scale or look in the mirror and see nothing has changed much. Sure, expecting changes within the first few weeks or months is a setup for failure, but sometimes it does make me wonder why am I doing this in the first place. Like I put all that effort??? And??? That’s it???

My initial push to start working out was because I hated my sedentary lifestyle and the effects antidepressants had on me where I gained a lot of weight because of it. I just wanted to be more active, and as such started doing more research on it which led me to where I am now. But soon it became a question of sure, I’m active now, but when the depression hits and suddenly I’m aware that my life hasn’t significantly changed enough for me, I question if it was worth it or not.

Then my depression takes things to another level by being frustrated at the fact that I am actually questioning this. Why can’t I be happy with what I can do now? Like what’s wrong with my body now? It can still do burpees and planks, it can still do proper jumping jacks and skip rope, it can carry heavy weights, run, stretch. So why am I so focused on changing? Why can’t I accept the fact that I should “accept my body as it is”?

It’s just so hard to be proud of myself at times.

I have changed my mindset on this now, as I realised that I had to take things one step at a time. Despite wanting to lose my “anti-depressant weight”, I actually started this workout with a very simple goal of wanting to see if I would enjoy doing HIIT workouts, considering that I had failed going to the gym on my own the year before. I wanted to see if this would  stick, that I would keep going for this. And it did!

But then when it came to the next step, of having actual fitness goals, I was shallow (aka depressed) and thought I should be dropping my weight by now seeing as I had been doing it for months, completely forgetting that working out alone doesn’t make me lose weight, and other lifestyle changes needed to be made to hit those fitness goals.

Still, the frustration remained, as depression didn’t make changing my mindset easy. But I kept working out anyways, because thankfully my initial plan of making the workout plan something I can stick to worked. A little too well, perhaps.

Then unknowingly I shifted my goals to cutting off antidepressants as something told me to cut them off now. That’s a success story I will touch on later, but for now, after cutting them off and realising that I wasn’t in a bad mental state as I was before, achieving my fitness goals became clear. I am now working on my diet and am slowly seeing my weight go down.

So far I have lost about 5kg this year, which still isn’t enough for me to be really happy with, but I am proud that I am still working on it and will continue to do so.

Even with that said, I get why some people give up working out especially if you don’t see any visible changes within the first few months. I still urge you to keep going, to at least find a workout you like and stick to it, though tweak your fitness goals accordingly. It turns out my goals were: like the workout > have a more active lifestyle > focus on weaning off antidepressants > (now) lose weight/reduce fat percentage.

I will share this more on my next writeup, because now that I have this out of the way, I’m excited to share all the great things that working out has done to me (that’s not just about losing weight cause I really haven’t cleared that goal fully yet haha).

3 Replies to “What Frustrates Me About Working Out”