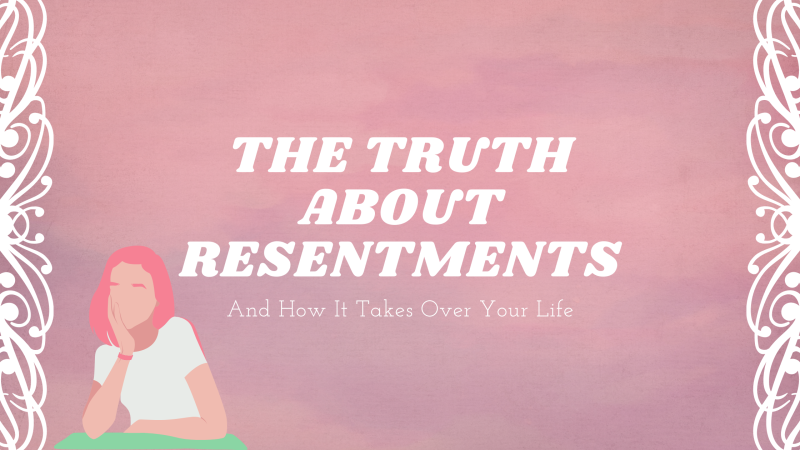 There was a time in my journey of dealing with depression that the issue of resentments bared itself at me. I became aware that I was being resentful because I realised I was replaying in my head all the bad things the people around me, and those who left, had done to me.

I want to make it clear, though, that being resentful and being hateful are two very different things. Being hateful means hating others and wishing ill, but resentment means bearing a lot of pain and anger by replaying scenes in our heads that makes us feel that way.

I had no intention of wishing ill on these people, but for some reason I held on to all the bad things they did to me and envisioned how I could convey the pain they caused me.

I knew it was bad, that this wasn’t benefiting me in any way. But I couldn’t stop. Whenever I had time to be alone in my thoughts, it was all I could think of.

I had, at the time, many reasons to feel resentful. As I struggled with depression, I realised I had resented my parents for bringing me up the way they did. I resented old classmates who feigned friendships only to leave me when my use was done. I resented the boys who promised to love me, but ultimately left me with a sense of self-doubt.

And that list just goes on and on and on.

As I was tackling my depression, it took me many years to realise that the best way to tackle it was to be more open about it. I talked about my depression to experts and psychologists that I could reach with my limited funds, to those who cared and were willing to listen, and I found a sense of freedom in being able to write about my innermost feelings and have online strangers give me comfort in return (which was LiveJournal or Tumblr, depending on the year)

I discovered I was depressed because I suppressed my feelings too much, and found it a little easier to control my depression since being more accepting about my condition and its existence. No, depression can’t be cured. I still fall into that trap sometimes due to various reasons, but at least I have the ability to be aware of it.

So when I realised I was dealing with resentment ( which took a really bad day of feeling suicidal to realise this), I tried to apply the same method of how I dealt with my depression. I spoke about it to those who were willing to listen, I allowed my darkest thoughts to emerge and fully acknowledged each and every one of my pain and anger. I screamed, I cried, and allowed my resentment free reign in my head for weeks.

In truth, I wasn’t wrong with acknowledging my resentments. But my way of dealing with it was definitely off. Even when I felt like I have let go of these resentments, it came back, often stronger than ever. This was a lot different from my depression, where the effects lessened the more I acknowledged it, to the point where I had power over it.

There was a time when I tried to resolve these resentments by settling things between me and the person I resented, due to a lot of miscommunications. I had hoped to clear some form of communication and create some understanding so that we can both move on and most importantly, I wouldn’t be resentful anymore.

Instead, that person misunderstood everything that I said once more, and next thing I knew, I was back at square one. Instead of finding any form of resolution, I found my mind wandering back to resentful moments instead and had a harder time letting go.

After that, I stopped sharing my resentments and found myself staring blankly a lot as I pondered about it. It was tiring, it drained so much energy out of me, when all I wanted was to just be happy with whatever little that I have. When I was feeling a lot calmer, I did some research on resentments and the best article I read (which has unfortunately been deleted) described how I should have seen my resentments and got me heading towards finally letting go.

The truth about resentments? It’s addictive.

That’s it. My resentments are something I’m addicted to. Just as how I’m addicted to sugar (which is still a WIP), I was addicted to the feeling of anger and pain because that’s all I ever felt from the way some people have treated me. That desire for retribution, replaying scenes in my head in hopes to change things, all this is some form of mental addiction to reiterate the way I was, to continuously tell myself why I SHOULD be in pain and angry.

But this is just another step forward. Acknowledging you’re resentful, and then acknowledging that being resentful is addictive, is still just another step in the acknowledgement phase. It’s the fixing part that becomes incredibly tricky, as it depends on your situation and the kind of help you need. After all, taking steps to make changes is never easy especially when it’s an addiction, and there’s a reason that pain is addictive.

As always, I would recommend seeing a professional to guide you if you’re struggling with this, so do seek a therapist or psychologist if you can.

How I Am Dealing With It So Far

It took me a long time, and a few wrong turns that led me to take antidepressants, until I could find some solace in not being resentful to the people of my past and what they have done to me. I am also working on various projects to help me get addicted on other things instead. I mean, why focus on emotional pain when your body is aching from a serious workout anyways?

Heh. I kid. That’s not always going to work either. But it has helped a lot so far.

I’m also learning to accept that I will never get the resolution that I want, and that even if I did get some form of resolution it may not be enough to heal the pain. It’s beyond just forgiving yourself actually, but more of reaching a point where you can actually forgive the actions of the other person as well without them asking for forgiveness. And that will always be hard.

But at least in this way I can heal the pain in my own terms, that will shape me to be stronger and better than who I was. And it’s a strength I hold on to so that I can move beyond my past.

Further suggested reading from me