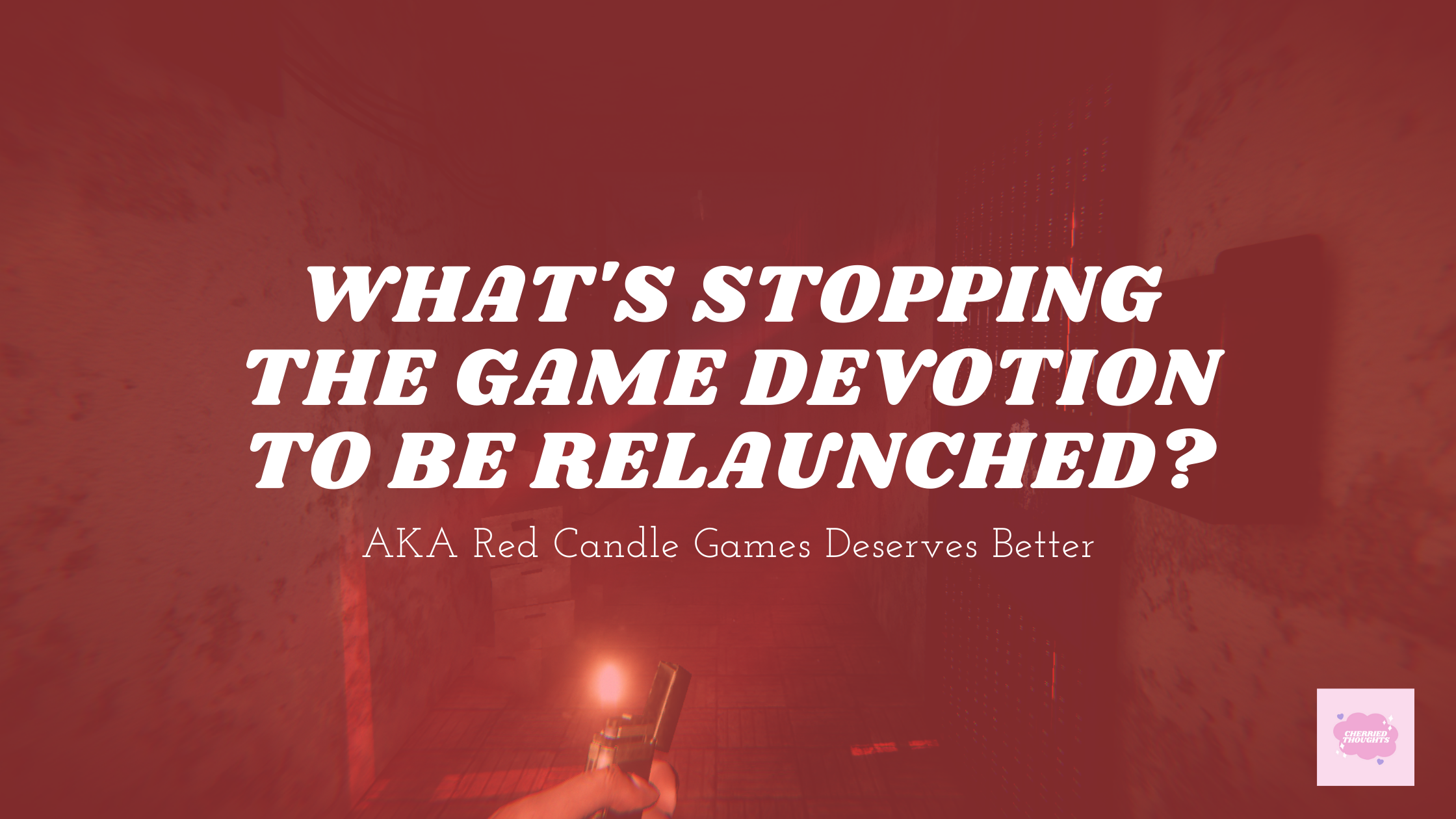 Red Candle Games (Red Candles) is currently my top favourite game developer company, and that’s saying a lot considering it has only two games under their belt. I’ve always been a fan of Asian Horror genres, and Red Candle gets everything right in this manner.

Their games that touch on the history of Taiwan through their immersive world building is one of the best I’ve seen in recent years, which is why the recent debacle over their second game has left me baffled and concerned.

But before I can proceed further, for those unaware of what is happening, here’s some context.

Detention was the first game to be launched by Red Candle Games back in January 2017. It is a side scroller game that touched on martial law in Taiwan during the 1960s while also being set ingeniously in a type of Chinese hell. The blending of both these elements stood out to me, reminding me why Asian horror works so much better than most Western horror.

Devotion was the second game launched in February 2019. It is a first-person psychological horror game that touches on Taiwanese superstition and the occult in the 1980s, while being set in an apartment that would have plenty of elements seen in most Taiwanese homes.

Both games touch heavily on Taiwanese history and culture, brought to life by the power of games and its immersive storytelling set up. It’s something I haven’t seen done so well in a while, the closest being Japanese horror movies and games. The fact that it’s so true to the essence of it being Taiwanese is what draws me in, as I love it when the media is capable of telling a compelling story steeped in culture while also being relatable enough for anyone of any culture to appreciate.

So it came to no surprise that their game Devotion solidified my love for the team when it was launched back in February 2019 and I didn’t hesitate to purchase it. I knew I was going to love the game, and bought it at full price the very hour it was made available on Steam (an act I rarely do when purchasing games, this has so far happened only twice). Heck, I was lucky enough to get a review code which I eventually received as I was working under a game publication at the time, but still didn’t regret purchasing the game!

It was definitely the best move I had ever made because within weeks the game was removed from Steam and, despite a recent short reprieve of hope that has now been snuffed out completely, has yet to rise back from the ashes.

For those unaware, the game Devotion was removed when it was revealed that an image of a talisman (as part of the decoration rather than an image you interact with) was insulting China’s President. According to Red Candles by EuroGamer, this was a complete oversight on their part as the talisman insulting the president was meant to be a placeholder, and as the game continued to be developed, was completely missed out.

Contrary to popular belief, Red Candles did immediately patch this error within the hour but unfortunately the deed was done. Chinese citizens aware of the image began to bombard the game on Steam with negative reviews, forcing Red Candles to remove the game from Steam. The negative reviews even affected Detention, though thankfully it was not removed.

Red Candles accepted this was a complete error on their side, and that they never had any intention to insult China as their focus was on the themes the game was representing.

Even so they accepted the error of their ways, and as such, accepted defeat in having the game removed. This would also give them a chance to fix any other buggy issues the game suffered from. So surely, at some point, the game would come back, right?

You would think that a mistake like that can be easily fixed by replacing that image paired with the most sincere apology from the developers. But that didn’t seem to be the case here. Even though a year and more had passed since the launch of the game, a proper platform to purchase and download the game still hasn’t been made available yet.

It’s baffling why this continues to be an issue because before all this happened the game had overwhelmingly positive reviews, and there’s no doubt that (other than the cursed talisman) the theme of this game had nothing directly political in it. But based on this article by Spiel Times, where there’s a will, there’s a way to make it seem like the game was curing the PRC.

Even if there were politics involved, this game was set in 1980’s Taiwan, and Taiwan’s martial law did not end until 1987. So it’s hard to completely remove politics if you want to genuinely set the game in Taiwan.

With that said, I barely noticed anything political in the game, as the themes were undoubtedly about the power (and downfall) of a parent’s love, and the horror of Taiwanese occult.

So the fact that the game continues to remain in the shadows continues to be perplexing, especially having taken this long. The only suspicion to have is that Red Candles has been unable to find a proper platform to put the game on due to the controversy. Which was why the latest update on Devotion was exciting to say the least.

There was a small spark of hope as, on 16 December 2020, Red Candles announced that the game was set to be re-released on GOG.com. This is it, after close to two years, we’re finally able to play the game! Or so we thought…

GOG.com (GOG) didn’t make it clear as to exactly why they decided to go against their plans of launching the game Devotion. Their comment was that they listened to gamers and decided it wasn’t a good idea, which is, again, baffling because there shouldn’t be any element in the game NOW to show that the game is against China. The aforementioned talisman would definitely be gone.

So how is it possible that the game continues to not see the light of day? What is Red Candles doing wrong now? Why are they still being punished despite doing everything they can to right their wrongs?

I mean, who exactly are the gamers GOG is referring to? Surely gamers expressing their displeasure alone shouldn’t be a strong and valid reason to not list it, especially since the source of controversy within the game is now gone. If a gamer doesn’t like something, wouldn’t it make more sense for them to NOT support the game by not purchasing it in the first place? How about not making the game available in China at least?

But seriously, all I can think of is: Is this really about gamers at all?

It’s not about the gamers

I honestly don’t think so. This screams political to me, and it’s almost cruel. You cannot blame many of us for believing that it’s mainly because GOG wants China’s continued support (that RMB smells really nice) as the reason why they went against relaunching the game, because the reasoning that gamers don’t want the game is too weak for us to believe.

Only an article from Taiwan News confirms this suspicion as it claims that this is because PRC gamers flooded GOG’s Twitter announcement to remove the game, but as the tweet has now been deleted, I cannot confirm this either.

While I hope GOG can deliver a better statement to clear the air, I have my doubts considering how long the statement has been released with nothing else to back up what they have said so far. So the fact that GOG is outright lying just to save their motto of being “For Gamers” is outright cruel and deceitful. They were better off being honest that they need China’s support than lie that it was what “gamers” wanted.

My heart aches on this continued censorship for a game that deserves so much better. But GOG canceling this relaunch shows signs that we’re all still at China’s mercy.

(I have another bone to pick about Malaysian censorship, but that’s for another time).

In a statement printed by The Verge’s sister site Polygon, Red Candle Games said that “in the aftermath of the incident, some still possess different speculations about Devotion. As regretful as the incident was, we have to bear its full consequence. We hope for a second chance in the near future. A chance to prove that, both Red Candle and its partner simply wanted to create a great game and no one wished for such incident to occur.”

With all that said: Please, please give Red Candles a chance to express their work and passion through their games. Even if we are unable to support the beauty that is Devotion, you can still support them with their first game Detention.

The game is currently available to purchase (thankfully) on multiple platforms such as Steam, Nintendo Switch, PlayStation Store, and even on mobile platforms Google and iOS.

Currently Netflix is airing a live action version of Detention with a modern twist, with only 5-6 episodes out as of now and has been interesting thus far (and has a very Taiwanese flair of dramatics from what I have been told by my husband). I’m enjoying it so far, but remain pretty reserved as I am still waiting to see how it will all unravel.

In terms of Devotion, there’s very little we can do to support the developers on this one. They did sell a physical version with merchandise on the game but that was a Taiwan exclusive that’s no longer available now.

The most we can do is pressure gaming platforms into seeing that the game WILL be well received. That, and also helping the developers to find a platform that they can put the game on. I have seen suggestions such as itch.io and Nintendo Switch brought up to Red Candles, which I am still a little concerned about because of possible China ties, but maybe the developers can work something out.

Whatever it is, don’t let Red Candles’ work remain buried into obscurity just because they made a mistake that some people out there refuse to forgive. Give them a chance. Let them tell their stories. Let their work rise again for all to see and enjoy. They really, truly, deserve it.